Has Goldilocks left the building?

Is the “Goldilocks” era of not-too-cold growth and not-too-hot inflation over? Read more from Donough Kilmurray - Chief Investment Officer with Davy Economists can debate the rights and wrongs of central bank policies, but most investors look at the fallen markets and scratch their heads – are there any reasonable returns to be had, or is it all just risk ahead? Even if markets recover and asset returns are ok, will inflation eat up all the gains? In other words, is the “Goldilocks” era of not-too-cold growth and not-too-hot inflation over?

To figure out where we may be headed, it’s useful firstly to understand how we got here. To do this, we look back to the decade where everything last went badly wrong – the 1970s. We focus mostly on the United States, as it’s the biggest economy and market in the world, with the most important currency and most powerful central bank, the Federal Reserve or “the Fed”.

Where it all went wrong – the stagflationary 1970s

The 1970s have a terrible reputation for investors, due to the decade’s negative real returns for both stocks and bonds, but as usual, the reality wasn’t that simple. Many of the root causes began in the 1960s when governments and central banks pushed expansionary policies in the face of tight labour markets and expensive stock markets. Sound familiar? Of course, the biggest driver of inflation, the energy crisis, did come in the 1970s. While it’s natural to compare this to the current crisis, the ten-fold increase in the price of oil during that decade is far beyond what we’re experiencing now.

Another familiar feature was the perceived lack of willpower to fix the problem. Apart from a few notable exceptions, like Germany and Switzerland, most central banks dithered in the 1970s and allowed inflation to take hold, which meant that the ultimate cure would be much harsher and more economically destructive. Eventually in 1980, and again in 1981, Fed chairman Paul Volcker hiked US interest rates to 20% and stock market valuations fell to levels last seen in the Great Depression.

How it got better – the “Great Moderation”

The punishing rate hikes of the late 1970s and early 1980s did more than choke demand and bring inflation down to bearable levels. They established the reputations of central banks, especially the US Federal Reserve, as credible inflation fighters. As the economy stabilised and interest rates came down again, the cost of doing business fell and investing became less risky. For economists, this was the “Great Moderation” and for investors, it ushered in the Wall Street boom years. 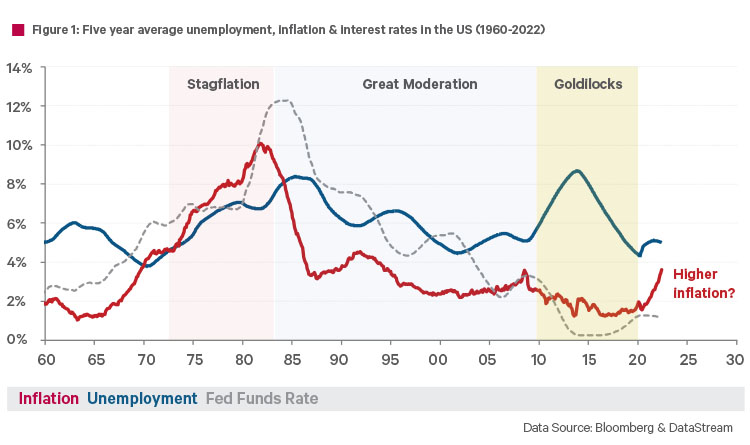 It wasn’t all smooth sailing, but whenever inflation looked like it might return, the Fed stepped in with pre-emptive rate hikes to cool things down, as in 1983 and 1994, and when there were emergencies, they provided rescue rate cuts, as in 1987 and 1998. Fed chairman at the time, Alan Greenspan, became known as “the Maestro”, and apart from a mild Gulf War recession in 1991, the US enjoyed almost two decades of steady growth, low inflation and extraordinarily strong market returns.

In hindsight, we know now that too much stability eventually causes instability. Economic over-confidence led to market over-valuation, and ultimately the stock bubble of the late 1990s. The Fed came to the rescue again with several years of very low-interest rates, which then led to the more devastating credit and housing bubbles of the 2000s.

The Goldilocks decade of the 2010s

But then 2020 brought the COVID-19 shock and the sharpest recession since the Great Depression. The Fed and others jumped into action, as fears of economic disaster and social disintegration led to the largest financial stimulus ever seen. Warnings of over-stimulation were brushed aside, and the money flowed to protect households and businesses. After disappearing in 2020, inflation began to rise again in 2021 as demand rebounded before supply chains recovered or workers returned. But most regarded this as transitory; central banks stayed their hand, and stock markets boomed again.

Towards the end of 2021, it became clearer that this new inflation was not fading away, and central banks changed their tune. Markets wobbled a bit at first, as they usually do at the start of rate hike cycles, but each higher inflation point made it tougher to regain their stride. Then Russia invaded Ukraine and energy prices pushed inflation to levels not seen in 40 years. Central banks had to choose between supporting the economy or stopping inflation, and they made it clear that inflation was more important. Without waiting to see the impact on the economy, markets assumed a recession was coming and sold off, signalling the worst opening half year since 1962.

What's next for investors?

It’s important to note that it’s far from clear that this rate-hiking cycle, aggressive as it may be, will cause a recession any time soon. At least not in the US, where the consumer balance sheet and wage growth are unusually strong. In Europe, the recession risk is higher. So the stock market may be over-reacting. Also, unless inflation stays close to double-digit levels, which is not our view, the Fed won’t need to repeat the extreme rate hikes of the Volcker era, and so any recession should be mild. This would be consistent with a price decline of 20-30%, close to what has already happened.

But where the markets have probably got it right is the realisation that the Fed will no longer automatically come to their rescue and protect the economy. No more Goldilocks – not when inflation is running so hot. Unfortunately, the more “sticky” components of the consumer price index, such as housing costs, and the tightness of the job market, indicate that inflation may not decrease to the official 2% target for some years yet. To protect their credibility, the Fed and other central banks may need to keep rates up for years too, and they may be reluctant to cut too much whenever the next recession does arrive unless inflation falls sufficiently too. 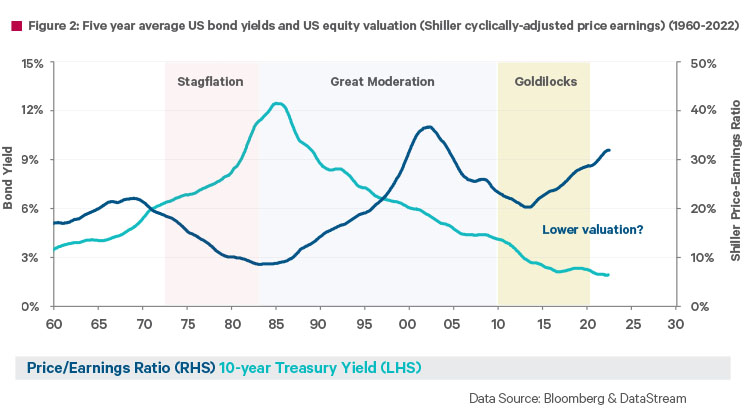 What does this all mean for investors? The post- Goldilocks era, where central banks choose to fight inflation rather than support growth, will be different in several ways. Firstly, bonds and stocks will be more volatile. Secondly, their returns will be more positively correlated than in recent decades, which means less diversification and higher risk at an overall portfolio level. Thirdly, stock market valuations are unlikely to run as high again. In market terminology, risk premia will be higher. And fourth, inflation may stay above target for much of this decade.

Ultimately, getting inflation under control will make for a more stable economy, and markets should benefit again, although perhaps not as much as they did in the Great Moderation. But until then, investors face lower and more volatile real returns, while cash will continue to lose its real value. In Goldilocks’ absence, a robust financial plan, with enough growth risk to beat inflation and enough liquidity to maintain staying power, will be an investor’s best friend.

Warning: Past performance is not a reliable guide to future performance. The value of your investment may go down as well as up. These products may be affected by changes in currency exchange rates.

Warning: Forecasts are not a reliable indicator of future performance.